Python package released for Tamilinaya-Spellchecker by @tshrinivasan and team’s work (based on @Neechalkaran creation) http://pypi.org/project/tamilinayavaani/0.13/ Windows, Mac and Linux users can get the package by command:

We thank @pycharm for donation of 1 seat professional license towards Open-Tamil development. __/|\__. Thanks to @infitt and Prof. @crselvakumar1 for their support toward 1-way airfare cost of attending 2017-Tamil Internet Conference in Toronto, Canada. https://github.com/Ezhil-Language 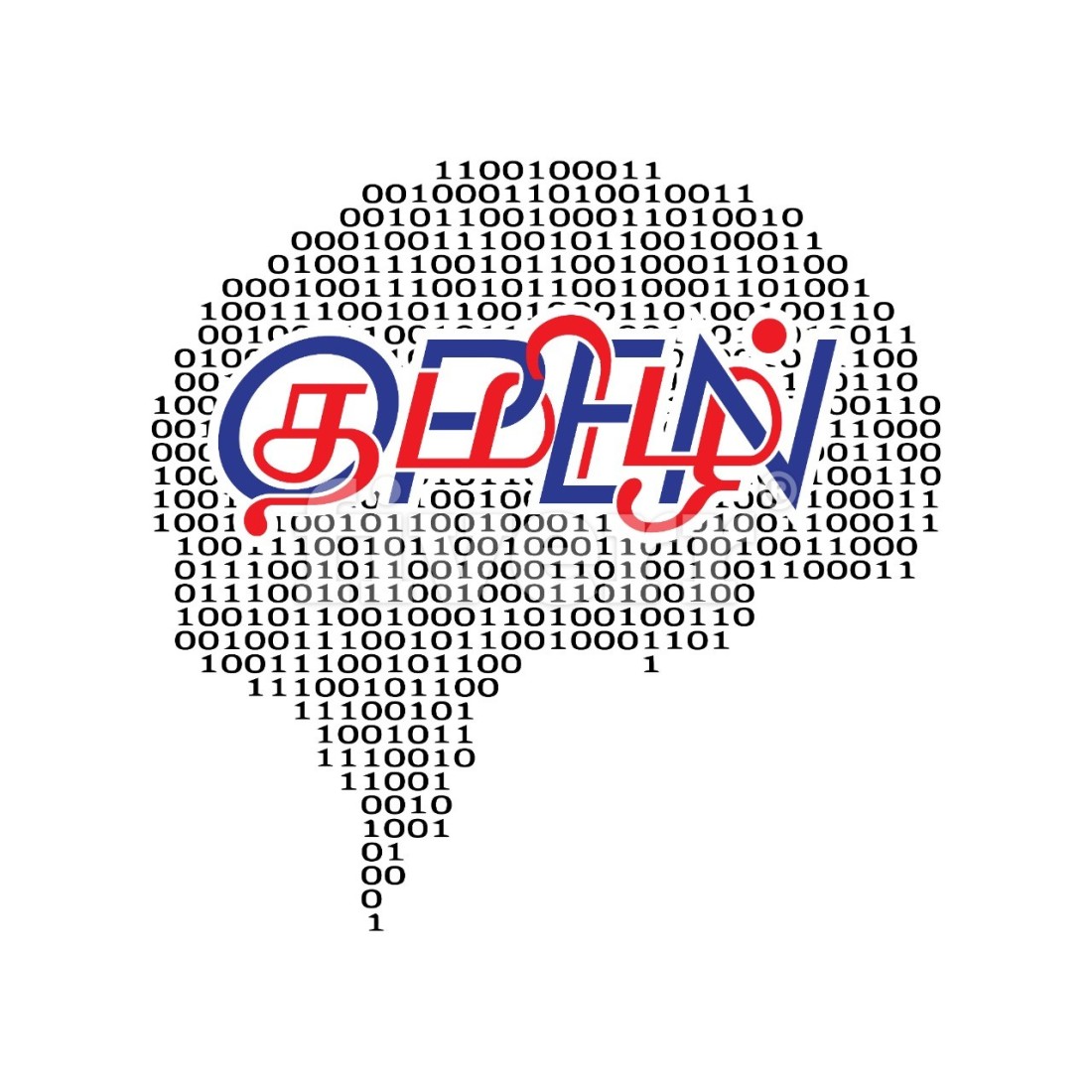 Open-Tamil is a free and open-source Tamil Text / Natural Language Processing library (NLP) written in Python, and developed since early 2010s. This blog post is cover our gaps in marketing (on our part, ofcourse) Open-Tamil regarding the capabilities and features presented by Open-Tamil python library. Open-Tamil Python package is distributed under MIT license.

Open-Tamil can be installed by running the following command from your terminal with root privileges on Python3. You cannot use current/later versions of Open-Tamil with v2.x – please refer to older releases on pypi page which are still available to you.

If you want to install locally, you can run this command instead,

Open-Tamil provides the following Python modules with various classess and functionalities. You can learn more about them from browsing our documentation.

One fun use of the API is to build interactive websites like tamilpesu.us but a more interesting use is to build a text based calculator taking inputs in form of Tamil numerals with Tamil words for arithmetic operations like add, subtract, multiply and divide.

Using Open-Tamil we can parse the numerals back to numbers and form a simple mathematical infix expression;

Well, all this can be done in less than 30 lines of code using Open-Tamil; if you don’t believe me check-out the code here.

A large number of individuals have contributed their time and effort over the years in many capacities to the project; should you wish to acknowledge this project in your research, products you can choose to cite any of our published works of relevance to you; our publications are listed here.

As always if you wish to report bugs, or share your comments please write an email to me ezhillang AT gmail DOT com or file an issue at github.

Over the course of this year, since translating Ruby Kin, and preparing a summary of 3 years work on spell-checker for Tamil Internet Conference – 2019, I’ve been thinking of next level of interesting projects.

The following have come to mind, expressed in Twitter @ezhillang in various forms. Here they are in simply chronological order,

Contingent on our levels and degrees of success we can share our work in forums like Tamil Internet Conference, ACL or ACM, etc.

Today, I had a chance to go to the Apple store. Trying the Apple stylus is a great tool for graphic artist.

I think Apple has elevated engineering to a high water-mark. Wow. Engineers can make magic when we all work together driving other professional designers, artists, marketers, manufacturers to synthesize beautiful experience. Technology, is magic.

Can we compose a Tamil Morse-code ? Yes, we can.

Can you decode what this Morse code means in Tamil ? Hint: 2 words (4,5) letters long

Please note table was updated to show letters in most-frequent to least-frequent alphabets and their code-words used. Updated after publishing on Aug 16th, 2018.

Information theory provides us with tools to calculate the information content of symbols in a language, i.e. alphabets in our case. Average codeword length was 6.45652 bits, which is rounded to 7bits.
According to 230+ symbols of encoded in binary without attention to letter frequency we would be using ceil[ log2[230] ] ~ 8bits per symbol, so the usage of Morse code provides a related data compression of 12.5%!

Previously, I had written about Morse code for Tamil in this blog here, and relationship with Unigram, Bigram and Trigram models and word-structure in Tamil language.

Of course 15 of 247 letters are perhaps not received any codeword in this codebook. Further with inclusion of Grantha letters, 323 letters exist in Tamil some of which we don’t have code words.

Further, a large text corpus like Project Madurai’s [PM] unigram frequency distribution maybe useful to develop a widely representative Morse code table. Once you have this PM unigram data, you know how to get this Tamil Morse codebook regenerated!

Today, you are welcome to play with open-tamil API via web at http://tamilpesu.us

This is collective work of our team underlying the website (written in Django+Python) highlighting various aspects of open-tamil like transliteration, numeral generation, encoding converters, spell checker among other things. At this time I hope to keep the website running through most of this year, and add features as git-repo https://github.com/Ezhil-Language-Foundation/open-tamil gets updated.

Thanks to Mr. Syed Abuthahir, many months ago, in winter of 2017, he has developed an interface for open-tamil on the web and shared with us under GNU Affero GPL terms. Later, we is added as part of main open-tamil as well.

The current hot trend in AI revolution is “deep learning” – which is a fancy way of talking about multi-layered convolutional neural networks; this field of study has heralded a new age in computing extending human capabilities by automation and intelligent machines [1].

These neural networks aren’t the same as neuron networks in your brain! We are talking about artificial neural networks which reside in computers and tries to mimic the biological neural network with its synapses (connections) of axons, dendrons and their activation potentials. These thinking machines have their beginnings in post WW-II research at MIT, in the work of Seymour Papert who introduced “Perceptrons,” and Norbert Weiner’s “Cybernetics”.

But do we know why there is sudden interest in these biologically inspired computer models ? It is due to GPUs which has accelerated all the complex computations associated with neural networks for it be practical in such a large scale. They allow these networks to operate on gigabytes (or even terabytes) of data and have significantly reduced the computation time from months to days, or days to hours, or hours to minutes usually by an order of magnitude – not possible in an earlier generation of computing. Before we jump into the details let us understand why we need deep learning and convolutional neural networks in the first place.

Science and engineering have traditionally advanced by our ability to understand phenomena in natural world and describe them mathematically, since the times of Leonardo Da Vinci, Nicolas Copernicus, Galileo Galilei, Tycho Brahe, Johannes Kepler and Isaac Newton. However gaining models through experimentation and scientific breakthroughs piece-meal for each problem at hand is a slow process. Outside of Physics and Mathematics the scientific method is largely driven by an empirical approach.

It is in such pursuits of building models of unknown processes where observational data far exceed our human intelligence to divine an analytical model, the advent of deep learning and GPU based multi-layered neural networks provide an ad-hoc computable model. System identification for particular classification tasks, image recognition, and speech recognition to the modern miracle of a self-driving cars are all enabled by deep learning technology. All this came about due to the seminal work of many innovators culminating in the discovery of efficient convolutional neural networks by Prof. Geoff Hinton, who trained them by hardware acceleration via GPUs.

An original pioneer in the field of AI, before the AI winter, Prof. Geoff Hinton and co-workers [2] recently showed deep learning models that beat status-quo benchmarks on classification and prediction tasks on the following speech, text or image datasets: Reuters, TIMIT, MNIST, CIFAR and ImageNet, setting off the renewed interest in the field of AI from academia and industry giants – Google, Microsoft, Baidu and Facebook alike [3].

GPU stands for Graphics Processing Unit [4]. These were originally designed for graphics rendering used in video games in 1990s. They have a large number of parallel cores which are very efficient for doing simple mathematical computations like matrix multiplications. These computations are the fundamental basis for machine learning methods such as deep learning. While the improvement in CPUs over years has slowed down over the years as Moore’s law has hit a bottleneck, the GPUs increase in performance has continued unabated showing tremendous improvements over the generations.

Such GPUs were originally invented for shading algorithms algorithms, are now applied in training large machine learning models using a Open CL or CUDA like frameworks (variants of C-language with description for parallel execution via threading) from the vendors.

The pioneering hardware vendors include Nvidia with their GPU series like GeForce, Tesla; AMD with its Radeon, GP GPU, Google has entered this race with its TPU (Tensor Processing Unit) and some offerings from Intel for ML training applications. Nvidia and AMD are the main players in the GPU space with Nvidia laying special emphasis on parallel computing and deep learning over the years. Nvidia just announced the new Volta generation chip based GPU V100 which is about 2.5 x faster than the previous generation chip Pascal GP100 which was announced less than 2 years ago [5].Compared to CPU, however GPUs are more than 50x faster for Deep learning. Performance of GPUs as function of various GPU families in shown in Figure. 1, and for another AlexNet data set is shown in Figure. 2.

If the Harvard architecture and RISC architecture based CPUs have been workhorses of personal computer revolution, then the advent of high framerate video-gaming pushed the CPU based graphics rendering from CPU + Video card based rendering to CPU + GPU, to CPU + GPU + GP-GPU (general purpose GPU); some of this overview is shown in Figure. 3a, 3b.

GPU’s are suitable for large numerical algorithms where various data have to be moved through a computational pipeline often in parallel; this SIMD problem, like genome sequencing shown in Figure. 3c, when solved by GPU gain the maximum speedup/acceleration. However, there is a fundamental limitations of GPU acceleration due to the Amdahl’s law which saturates the parallelization upto the available serial bottlenecks for a given computational task.

To build a deep learning application one may use their labeled datasets to build a learning model on any of the various frameworks [6] (both open-source or closed) provided from competing vendors in the industry as follows:

Tamil applications for deep learning including providing or improving existing solutions to the problems of,

Hardware acceleration and availability of big-data (labeled datasets) will play key role in the success of applying deep learning techniques to these problems.

Ezhil Language Wordpress Blog by Ezhil Language Project is licensed under a Creative Commons Attribution-ShareAlike 3.0 Unported License.
Based on a work at http://ezhillang.wordpress.org.
பின்னூட்டங்கள் ஏற்றப்படுகின்றன..
பின்னூட்டம்
×