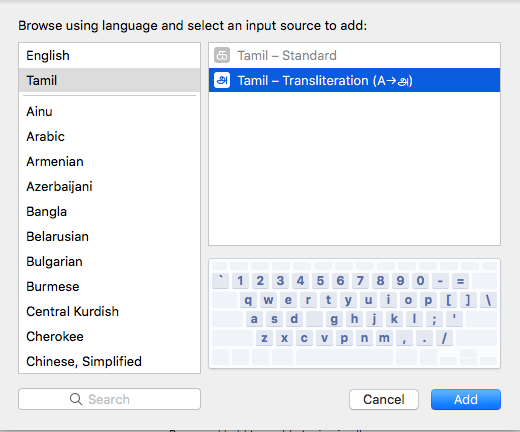 Traditionally Apple Keyboard for Tamil has supported “Tamil Standard” [there are some anecdotal frustrations of senior Tamil computing innovators about Apple culturally appropriating this ‘Tamil99’ as their ‘standard’ and stripping away any mention of Tamil99, but this is for another day. Shh.] or Tamil99 layout which is quite useful for most practitioners. However one may observe in Tamil computer user community the prevalence of preference for transliteration input [Google has trained us by providing some good tools here, and Apple follows suit].

This method is useful for typing short sentences for my use so far, but I have to spend long enough time to pick it up. I hope Apple continues to support this feature and introduce Tamil input to several newer younger generation folks.

Plusses include – easy predictive input. Minusses include – somewhat non-intuitive mapping for certain letters. I cannot post a full review here, only for lack of trying. Thanks, Apple.

I’m somewhat late to hear this news, but recently there was a bug in iMessage application of iOS and Mac platforms causing it to crash/freeze up as reported here.

The crashing character consists of 5 codepoints.

and has a complex ligature form.

Sadly the poor usage of Telugu language Unicode block is potential cause to discover the bug so late; however the root cause of bug is some unsightly buffer overflow in Apple’s codebase.

Who knows if Tamil Unicode has any equivalent horrible bugs living in Android/Apple/Mac/Linux/Windows platforms. Hopefully not.

Ezhil Language Wordpress Blog by Ezhil Language Project is licensed under a Creative Commons Attribution-ShareAlike 3.0 Unported License.
Based on a work at http://ezhillang.wordpress.org.